The British government is continuing to pursue economic policies which benefit the old and wealthy whilst inflicting severe cuts on young working families, yet it is trumpeting a narrative which tries to persuade working people that it is on their side.  This is flagrantly dishonest.  The following chart shows how a young working couple might experience a drop in net income in the next few years: 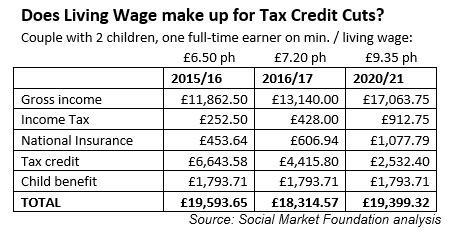 “a budget whose slick politics hid economics that were often wrong and sometimes dangerous. The flagship substitution of tax credits for wage floors is a bad mistake; cutting benefits to the very poor while reducing inheritance tax for the wealthy is indefensible.”

George Osborne’s speech at the Conservative Party conference on 5 October 2015 has confirmed his intention to continue with these policies, pursuing a path which has reflected a political cynicism that has been evident ever since he took the job of Chancellor in May 2010.

When he first took office, he skilfully persuaded the British people that the previous Labour government had been responsible for the financial crisis in 2008 – but its real cause was reckless behaviour by banks and financial institutions, especially in America, leading to a credit crisis when the housing bubble finally burst.  He then persuaded everyone that austerity was a necessary medicine to correct the fiscal deficit, which was less than 1% at the time of the crash.  His policy of cutting government spending worsened the depression caused by the credit crisis, as unemployment increased and the welfare budget predictably ballooned.  He succeeded in increasing the fiscal deficit at the same time as trumpeting policies which he said would reduce it.  His measures were criticised by prominent economists, and the economic recovery in Britain was much slower than in America, but the British public believed (wrongly) that cuts were necessary – and that belief enabled his party to emerge triumphant in the 2015 General Election.

If the public were better educated, people would be able to see his cynicism for what it is: a focus on winning elections rather than benefiting the population as a whole.  He has ensured that the cuts fall on young working people whilst protecting wealthy pensioners.  And pensions are the largest item in the welfare budget.

It is perhaps hopelessly idealistic to expect wealthy pensioners to vote against a government which so blatantly protects their interests at the expense of the next generation, yet if those with a social conscience were to join with the numerous victims of his economic policies they might yet demonstrate that a bad government can be replaced in a democracy.

This site uses Akismet to reduce spam. Learn how your comment data is processed.