(This is an archived page, from the Patterns of Power Edition 3 book.  Current versions are at book contents).

Although the definition of ‘politics’ that is used here includes family and organisational politics, the term 'politician' in this book is restricted to those whose prime function is to exercise powers on behalf of the people: to represent them externally and to provide governance, in the form of leadership and administration, internally.

This usage excludes those who are responsible for day-to-day management of public services, where the term ‘public servant’ is used if the person is employed by the State; public servants should provide the best service they can on behalf of the population, whilst complying with whatever direction they are given by politicians.  Decision-makers whose prime responsibilities are in other dimensions of power – business, religious and military leaders, for example – are also excluded from this definition of the term ‘politician’.

The processes for appointing politicians, and the mechanisms by which they interact with the people they serve, are at the core of the Political Dimension of governance.  The power relationship between people and politicians can be described as a negotiable bargain: politicians are granted power and they receive support (perhaps only tacit support) in return.

The following diagram provides an overview of the role of national politicians: 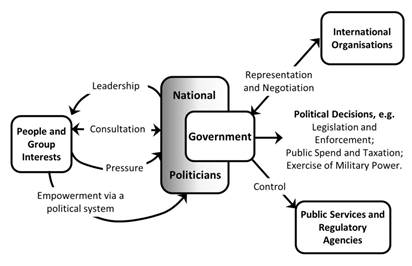 Going clockwise round the diagram, from the bottom left:

• The population empowers the politicians: whether through the ballot box in a democracy or by giving its tacit consent in an authoritarian system of government.  If it is electing them, it may do so on the basis of their ideologies or policies – which may vary, as suggested by the shading.

• People and group interests can put unsolicited pressure on politicians in any political system.

• Politicians can initiate consultation to find out what people want; again, this is possible in any political system.

• They can try to persuade the population to change its attitudes and behaviour, by exerting political leadership.

• Politicians can have different ideologies and ideas about how to govern.  The shading represents shades of opinion, which tend to be represented by different political parties in a democracy.

• The diagram illustrates the overlap in the British system, where members of the government (ministers) are also Members of Parliament, whereas in America the members of the Administration don’t sit in Congress – though they may be connected by membership of the same political party.

• In both Britain and America some national politicians oppose the government and act as a check upon its powers.  Many other countries have similar systems, but there are countries where there is no formally constituted opposition – as is the case, by definition, in a one-party State.

• Governments represent their countries in many, but not all, of the interactions with other countries and with international organisations.

• As described in the next section, governments make decisions related to other dimensions of power.  These decisions have a political impact which can be analysed separately from their effects in those dimensions.

• In return for being given power, a government should ensure that public services and regulatory agencies work effectively in the public interest.  It sets objectives, terms of reference and regulation – whether public servants, commercial organisations or civil society are responsible for delivering the services.

The role of the local politician is somewhat different, but the analogy can be easily drawn: they are responsible for local services, for local political decisions such as town planning, and for negotiation with national government departments when the latter are making decisions that affect local interests.  Each layer of political subsidiarity has its own issues, as discussed later in this chapter.

The politician’s role can also be thought of in terms of providing mechanisms for negotiation, in this book’s extended use of the word (2.4):

• People are, in effect, negotiating with each other when they elect politicians in a democratic system.  Elections are one way of determining what policies the majority wants.

• When they have been given power, the politicians have the opportunity to facilitate further negotiation: by responding to pressure or by initiating consultation.

• The inclusiveness of the negotiations depends partly on how they cater for pluralism.

Politicians have an obligation to serve the people well and, depending upon the political system, they may pay the penalty of having their powers removed if they are judged to have done badly.  In most countries they are also subject to legal constraints in how they use their powers.  It is in the interests of both the population and the politicians that the latter should try to determine what is necessary to increase the level of acceptability of governance and then try to make it happen.